Cherry powdery mildew is a major problem in sweet cherry growing regions in the U.S. Pacific Northwest (PNW), but much less so in the eastern part of the country. Management of foliar infection has been identified as a top priority for PNW stakeholders because nearly all commercially important scion cultivars are susceptible, and fruit infection is also increasing in importance. The disease has been routinely controlled by a range of chemical sprays; however, development of resistance in the pathogen is an increasing problem.

International reports of cherry powdery mildew date back to the 1800s, although these exclusively describe foliar infections. The first report of sweet cherry fruit infection originated from Harley English, a USDA researcher based in Corvallis, Oregon, in 1947. He confirmed the first powdery mildew outbreak on sweet cherry fruit grown in Squilchuck Canyon near Wenatchee in 1944 (1). Together the foliar and fruit phases of powdery mildew are now considered a disease nemesis for sweet cherry in the PNW, and this pathogen is one of RosBREED’s targets. 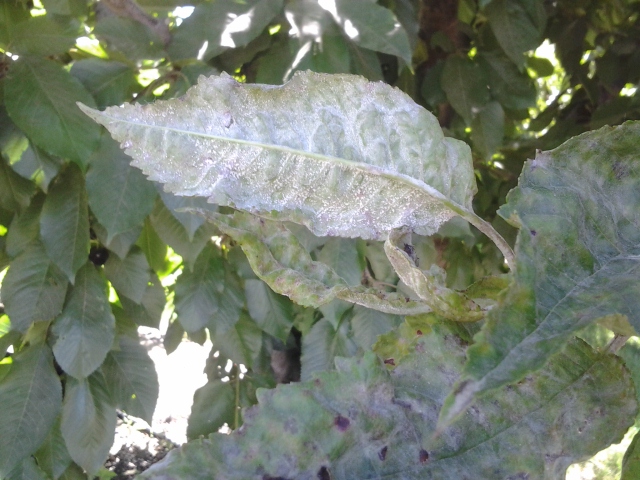 The disease is caused by the fungus Podosphaera clandestina. Due to its obligate biotrophic (from the Greek: bios = life, trophy = feeding) nature, the life cycle of the pathogen is well aligned to the development pattern of its plant host (2). The fungus overwinters as chasmothecia – sexually produced fruiting bodies found in the bark, tree crotches, and decaying leaves on the orchard floor.

With the rise of temperatures in the spring, use of orchard irrigation, dormant chasmothecia burst and release ascospores that readily infect newly emerging leaves (3). These primary foliar infections typically appear as a white powder on leaf surfaces and, while not fatal, can discolor and/or kill leaves and distort shoots.

Cherry leaves increase their level of resistance to powdery mildew as they mature. This is referred to as ontogenic resistance, in which young leaves are highly susceptible and older leaves highly resistant to pathogen infection. Hence, foliar infections are spread via young leaf tissue (Fig. 1) and can explode into devastating epidemics, especially under favorable conditions of high relative humidity, often caused by irrigation, and air temperatures of 68 to 72?F (4).

In contrast to foliar infection, fruit infection is a slow and nearly invisible process. Onsets of fruit infections occur later in the growing season, usually mid to late June, and often seem to happen “overnight.” The pathogen remains quiescent and viable on the fruit surface for a long period, with a maximum reported latent period of 56 days. Because incidences of foliar infections are not necessarily indicative of fruit infection, outbreaks of fruit infection are extremely unpredictable. Usually, early-season cherry cultivars escape fruit infection even if foliar epidemics are ongoing. On the other hand, and of great commercial significance, popular late season cultivars like ‘Sweetheart’ and ‘Skeena’ can display very little foliar infection yet suffer extensive fruit damage by harvest time. Damage from the fruit phase can be limited to barely detectable superficial fungal strands, but in severe cases causes scarring and surface pitting that render fruit unmarketable and potentially lead to export rejection of entire lots (Fig. 2).

To date, fungicide applications remain effective means of controlling powdery mildew. However, growers must consider both the foliar and fruit phases of the disease, so management is a season-long challenge. Careful foliar powdery mildew management can keep disease pressure low, and subsequently reduce the amount of spores later in the season, and thus reduce the inoculum load that could lead to subsequent fruit and foliar infection. Additionally, full-season spray regimes can limit the amount of chasmothecia produced by the fungus, reducing overwintering potential and next season’s primary inoculum sources.

However, protecting developing fruit from in-season airborne spores remains a challenge. Because most fungicides are only protective, fruit coverage needs to be complete, which is particularly difficult for tight fruit clusters. Further, as fruit rapidly grow, the protective fungicide layer becomes interrupted quickly, leaving unprotected areas of the fruit vulnerable to infection. Once infections have established, fungicide treatments can only be used for damage control.

Given the limited tools available to manage powdery mildew, especially in organic farming systems, incorporation of host plant resistance into commercially acceptable cultivars is an obvious approach. Utilizing a rigorous standardized phenotyping protocol at WSU-Prosser, resistance to the foliar phase of cherry powdery mildew has been found, and a major-effect locus conferring this resistance was identified.

Cameron Peace and Paul Sandefur, RosBREED scientists at Washington State University, have developed and are deploying a new DNA test for this foliar powdery mildew resistance locus to make breeding resistant commercial cultivars more efficient and effective. The next goal is the development of one or more DNA tests that are predictive of fruit infection. With such tests eventually in place, the RB2 goal of combining horticultural quality with disease resistance to produce superior commercial cultivars will be enabled. A win for sweet cherry consumers and sweet cherry growers alike!