Jewels in the Genome: Bp-2 for Bitter Pit in Apple 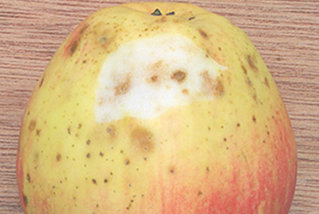 Bitter pit in apple is a fruit physiological disorder often expressed during postharvest storage whereby soft discolored “pits” develop on the outside of the fruit flesh, rendering the fruit unmarketable. Cultural practices such as calcium post-harvest dips are used to minimize the incidence of bitter pit; however, these treatments are not sufficient for particularly susceptible cultivars such as ‘Honeycrisp’, and storage losses still occur.

Developing apple cultivars with the reduced susceptibility to bitter pit has long been a priority for apple breeders. An initial investigation suggested that two major loci, named Bp-1 and Bp-2, are involved in the genetic control of bitter pit susceptibility (Korban and Swiader, 1984). Two additional investigations identified and validated a large-effect bitter pit locus on apple LG16 which is believed to represent the previously described Bp-2 (Kumar et al., 2013, Buti et al., 2015).

Two SSR markers (Hi22f06 and CH05c06) most closely associated with Bp-2 were found to be predictive of bitter pit susceptibility. Severe bitter pit symptoms among 106 progeny were 100% associated with the homozygous genotype 236/236 for Hi22f06 and the genotype 115/123 for CH05c06 (Buti et al., 2015). Therefore, these SSRs can be used to determine desirable parental combinations and eliminate bitter pit-susceptible seedlings prior to field planting. However, use of this diagnostic test for bitter pit should be coupled with knowledge of the neighboring trait locus that strongly influences fruit acidity, crispness, and juiciness (Ma, https://www.rosbreed. org/sites/default/files/resources/newsletters/RosBREED_Jewels_ Malocus_apple.pdf) and resides less than 5 cM from Bp-2.

Available DNA tests for Ma (Xu et al., 2012 and “Ma-indel” used at Washington State University) and Bp-2 can be used together to design crosses and select progeny that have desirable eating quality attributes with reduced bitter pit incidence. Therefore, because knowledge of this genetic region will lead to more effective breeding of apple cultivars, it is featured as a RosBREED “Jewel in the Genome.”